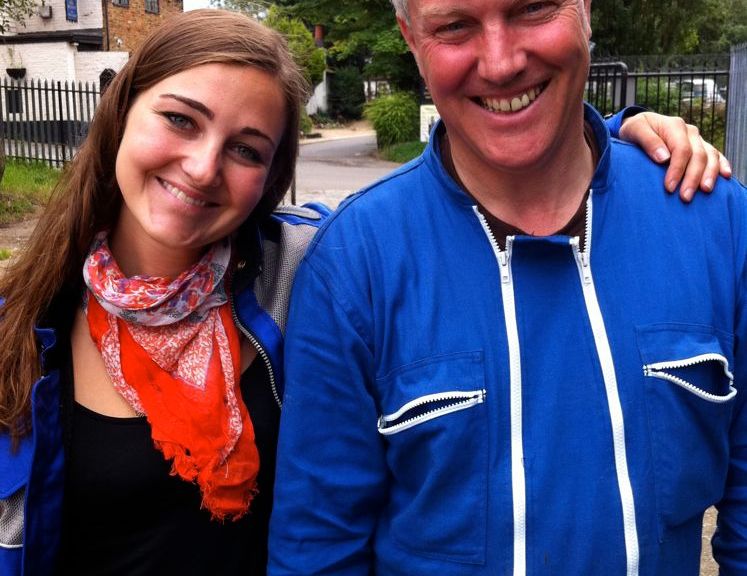 “Where the frack is Essen? And why the hell didn’t I buy a GPS like a normal person??” I was once again totally lost, this time in my 6th European country. It would not be amiss to say that I was, perhaps, lost for most of the trip… I do love simplicity, but seriously, a GPS is just about the handiest thing you can have while on a road trip through foreign countries, especially when you don’t speak the language. I should have realized the German road signs wouldn’t match the English Google directions and town names. Köln does not look like Cologne to me. Google Gods- you have failed me!!

I had ridden some 600 miles in two days, at warp speed on the autobahn (sorry mom), and was exhausted… As mentioned in my previous post, a man found me falling asleep at a gas station, at night, and offered to lead me through the woods and across the meadow, to my friends house some 60km in an unknown direction. I was very lost. And very tired. And his German accent was very funny. Besides, he had a kid with him, so how scary could he be? Right? Right??

Within half an hour I was delivered to my friend’s house by these nice guys. 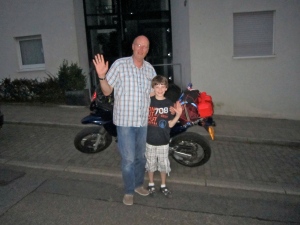 The friend I was visiting was a girl I met while hiking 500 miles across France, on the Chemin de St. Jacques (the French side of the Camino de Santiago, which I did in 2010). We had spent quite a few days together, and I was looking forward to seeing her in her home town, where she was studying music.

We spent a day lounging by the River Ruhr and just catching up. A day later we breakfasted on dark bread and marmalade in Germany, lunched on waffles in the Netherlands, and dined on beer and chocolate in Belgium.

Antwerp will always be one of my favorite European cities. Glorious old architecture, cobblestone streets opening onto huge plazas, cathedral spires in the distance, bicycle riding all day every day, delicious waffles and chocolates, and a beautiful summer-only bar known as “Zomerbar”, open to all ages. Lit by fires and garden lights, one can wander winding sandy paths through woods, tree houses and hammocks while sipping on La Chouffe and watching whole families out enjoying the summer night.

With one of the biggest seaports in Europe, it was also here that I very seriously considered catching a freight ship home with Ghettobike, and riding across the United States. Unfortunately, the new school year was starting in just 3 weeks, and I needed at least a month to pull it off. Besides, my sister was pregnant with twins and due a month later. There would be other opportunities to travel through Scotland and Ireland… It was time to go home.

I thoroughly enjoyed my few days in Antwerp, staying with a Couchsurfer and ex-professional motorcycle racer turned police officer on Antwerp’s main park. When I rolled up he looked at me, pointed to my lack of proper gear, and said, “Fine for no jacket, fine for no proper boots, fine for no gloves…” I don’t normally ride without my gear, but it was brutally hot and I was melting. He taught me a thing or two about riding bikes, not to mention gave me a sweet new motorcycle jacket suitable for the hot weather, a relic of an ex girlfriend, I think. It was another great Couchsurfing experience, and I really got to see the best of Antwerp and its people.

The days rolled by too quickly, and I soon found myself whizzing off to the ferry in Dunkirk, missing that ferry by minutes, and speeding for Calais instead. Destination: Dover, England. It’s all a bit of a blur now, but I do remember being escorted from Dover to the outskirts of London by a motorcycle gang of a dozen old dudes on choppers. They joked at me not wanting to be seen with the likes of them, and I have to say, it was a pretty rare experience! They also helped remind me to stay on the left, through the dark drizzly English evening.

It was a Sunday, and I didn’t arrive at my next Couchsurfing destination until nearly midnight (damn it- I REALLY could have used a GPS!). It was early August, and the Olympic Games were in full swing, meaning that even on a Sunday night, the traffic was terrible, roads were closed off, and I felt like I was going around and around in an awful smelly circus, which turned out to be Piccadilly Circus. Missing the open countryside and Alps, and absolutely exhausted after a whirlwind 8 country tour, I spent the next couple of days resting and getting my motorcycle to Austin Vince and his super-star motorcycling wife and author, Lois Pryce. He had offered to sell it for me when my trip was done, something I cannot thank him enough for doing. Besides, it meant I got to meet Lois, a true female adventurer.

The main part of the trip was done, and I was sad to see it over so soon… All my fears of traveling alone and figuring things out on the fly were for nothing. It was a hell of a journey, and one I cannot wait to attempt again.

In early July 2012, I left my dear French friends and found myself alone on Ghettobike. I cruised out of Dijon at a much peppier pace, given half the previous weight was now on a train to Paris. My travel buddy, handy-girl and navigator was gone. We had been crammed on that bike like sardines for over 800 miles from London to Chalon-sur-Saône, but I missed her already. I was nervous for the solo part of the adventure END_OF_DOCUMENT_TOKEN_TO_BE_REPLACED

On April 26th, 2012, I was fortunate enough to hear Austin Vince give a presentation in Seattle about various awesome motorcycle adventurers you’ve never heard of. My good friend and recent travel buddy Ashley thought I’d be interested in going, but couldn’t make it there herself.

Having already purchased airlines tickets to Europe for the whole summer, with no real plan of what I’d be doing except hiking my third section of The Way of St. James, I decided I wanted to be one of those motorcyclists you’ve never heard of, too END_OF_DOCUMENT_TOKEN_TO_BE_REPLACED