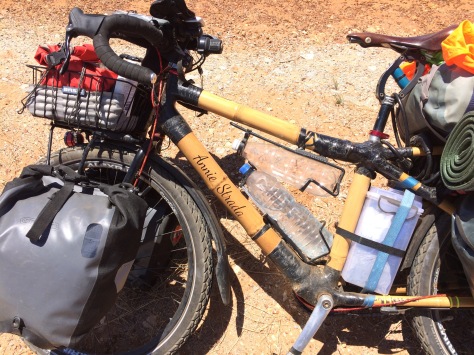 There’s no doubt about it, I love motorcycling. But with 50,000 miles under my expanding belt (and a waistline progressing with age), I’ve wonder if it’s time to put the keys away for a while and go back to human powered journeys, like in the past. Hiking, or riding a bicycle, can be significantly cheaper than a motorcycle after all*, and this blog is dedicated to frugal adventures. And to clarify, a ‘human powered’ adventure would be something that requires getting from point A to point B while expending your own strength and energy. Trekking, cycling, kayaking, running, climbing, skiing, etc. No need for gas or oil means you can spend more on food, much deserved (and needed) during a human powered adventure. And while using your own steam to get around sure is tiring, you’re allowed to eat anything and everything you want, while getting trim and healthy. An adventure, frugal fun, a workout and getting to eat to your heart’s content? Not a bad tradeoff! Sure, it’s slower, but there are definitely many bonuses.

Now motorcyclists, don’t get up in arms! I’m not quite ready to give up my motorized ride forever (nor am I suggesting you to) but maybe we should think about changing things up a bit. From unicycling to skateboarding, there are so many options to be explored. My mind’s already in a frenzy with the possibilities!

On my ride across the Nullarbor this December, 2015, I saw 4 cyclists clearly on a long-haul journey across Australia. Heads down to the wind, shades on and arms protected from the harsh southern sun, they peddled mile after mile on fully loaded bikes with little company. I stopped and talked to two of them, and have included a video here. The wind was in such a blowing fury during parts of my interviews that only snippets were usable, but I hope it gives you an idea of what so many people are out there doing, even as this passage is being read.

The dozens of men and women cyclists I’ve met on my long hauls across the Americas, Europe and Australia were a huge inspiration. Young and old, they traveled across countries, continents, and even the world. While I slogged up 14,000 foot passes with my little 125cc engine puffing and panting, they slogged harder. While I opened up the throttle and rode long days across the Nullarbor, they rode longer (and sweatier, and in far better shape). While I paid $18 bucks for premium oil in Australia, they paid $18 for a fine dining experience. And although my motorcycling experiences have been life altering, there’s something to be said for changing things up a bit.

Hats off to you, cyclists! You put my little engine to shame.

*Note: I’ve met a number of people whose fancy bicycles cost more than my frugal little machines, but that doesn’t have to be the case! And there’s the question of food consumption vs. fuel (gas) consumption, but I leave that for another time.