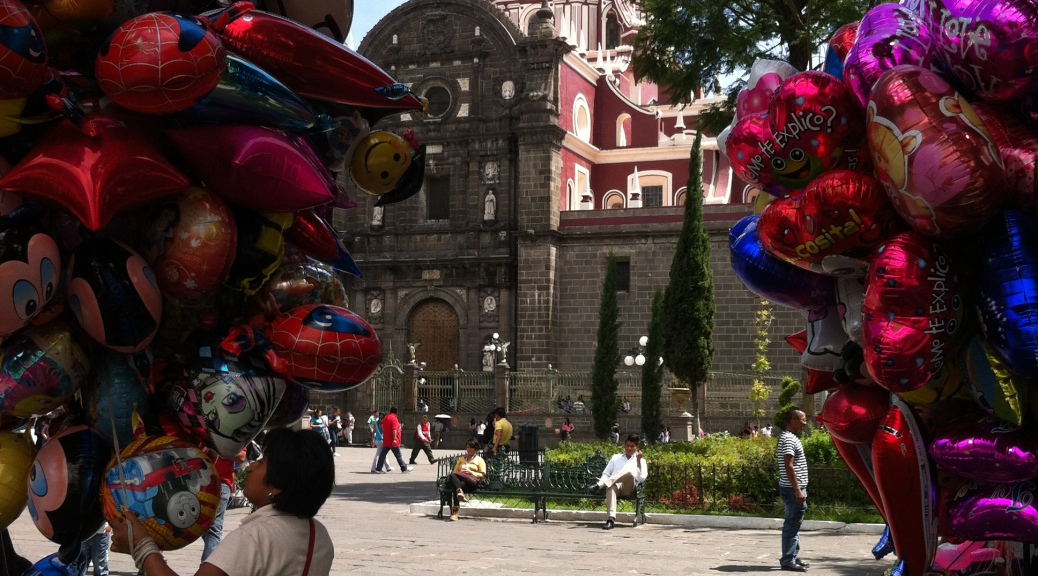 Waking up at 5:45am to a 6.3 magnitude earthquake in the State of Veracruz, I could hear women screaming and crying as I stood in the middle of my hotel room wondering if I should put clothes on, and trying to distinguish my dreams from the reality of the moment. Mrs. Obama had just won her first term as the first female president of the United States, but the camera man couldn’t keep the camera still on live national television…

A surreal experience. I dashed to a doorway until the shaking stopped, then threw jeans and a flannel on and went outside. Dozens of people were already congregating in the parking lot, talking excitedly. One young woman was wrapped in nothing but a sheet, clutching her female companion

and crying/laughing intermittently. It was still dark, and after a few minutes of nervous conversation, I made my way back inside for another couple of hours of sleep.

In my post-earthquake dreams, I walked out to my bike later that morning to find someone had stolen the engine, and then had the nerve to convert my little motorcycle to an engine-less scooter that didn’t even run! And they had changed the color and shrunken the tires! Bastards! This disturbing dream woke me up at the crack of dawn (10am) to go check on my bike. All was as it should be.

I was soon breakfasting in the gas station parking lot next door on soft tacos with a dozen other travelers, all Mexican, going from one town to the next. I ordered one with eggs and rice from the guy preparing them out of coolers, and one with rice and a chili relleno de queso. Who knew a grilled green cheese stuffed chili would be so delicious, and cheap. My $1 coffee from a mini mart on the corner was surprisingly good, and I hit the road at the crack of 10:30am after chatting with locals. The morning dramas were all but forgotten.

I cruised leisurely to Puebla, snow-capped mountains cropping up and eventually a whole range I would slowly ascend. Before the ascent, I stopped for an iced mocha at The Italian Coffee Company, a Starbucks rip-off popping up all down the highway. It wasn’t good, but I enjoyed the cold iciness and the free wifi as I avoided the toxic tasting rainbow sprinkles and fake whipped cream. The air conditioned building was a relief from the hot muggy weather.

As I ascended the mountains, the brutal heat was all but forgotten as the cold mountain air swept over me, sending shivers down my spine and causing my shoulders to hunch uncomfortably against the chill. After a long ascent, the road descended a short ways on the other side and then reached a wide open flat plain with frigid air but warm rays of sun. This was Mexico’s altiplano, and my bike was feeling the lack of oxygen as it chugged along and backfired. At this slow pace, I examined my ungloved left hand and noticed how dark it had become, whiter at the fingers where they hid under the clutch in the shade. They looked aged, different, and I made a mental note to dig my gloves out. I stopped in at a local comedor, and after the proprietor said she had absolutely nothing vegetarian, I ordered a hardy meal of fried eggs, rice, beans, salsa and tortillas anyway. She didn’t seem to think this was enough, and several times tried to bring me seconds of everything. Her usual trucker clientele loved her for sure. While she served me, her only client that late in the afternoon, her kids and husband sat at a table in the kitchen eating lunch and watching cartoons.

Entering Puebla was like riding into a European city. The buildings were beautiful and old, well maintained with class and grace. Everything was clean and orderly, no honking, little poverty, and surprisingly few foreign tourists. Boutiques, cafes and shops lined the wide sidewalks as Mexican tourists on their own summer vacations wandered the zócalo, the central plaza, taking pictures. A bicycle lane lay unobstructed to my right, although no one was using it. The buildings were colorful, flower pots hanging from the windows and old fashioned light posts. It was easy finding 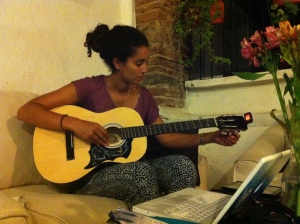 my hostel, a tranquil place in a historic building where I found one American girl from New York, and the following evening, two hilarious girls from Poland and France, en route to Oaxaca for an internship in medicine. We shared a lot of laughter in the very short amount of time we spent together. The French girl helped tune the brand new guitar I had just purchased, playing a bit for us, before I found a private place to practice.

That first evening I walked around alone until 10pm and felt surprisingly safe. An old lady was selling cooked corn in a cup with cheese, mayonnaise and hot sauce for just over a buck, preparing it in her doorway in big old ceramic pots, decorated with flowers on the outside. Later on I discovered something made of fried dough filled with potato and cheese, made fresh before your eyes with a tortilla press and your choice of stuffings for under $2. The two establishments, side by side, were both packed with locals standing around eating while leaning against the numerous parked cars. I walked around the zócalo and admired the architecture, the people, the vendors selling bouquets of flowers and balloons. 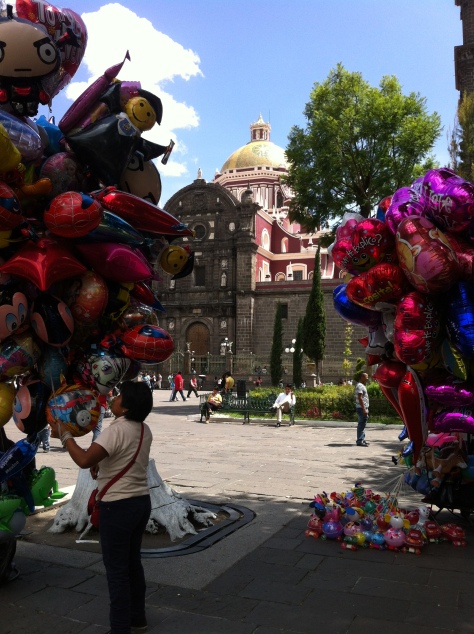 Wandering back to the hostel I found myself on a darker, quieter street and wondered if I should find a better street to walk down. Another half a block and I came across people standing in the intersection, police cars, camera crews, lights and huge white vans at all four corners. I had stumbled right onto the set of a filming of the telenovela Colores de la Pasion, “showing at 7:45pm, and you were here to see the filming!” a woman whispered excitedly. 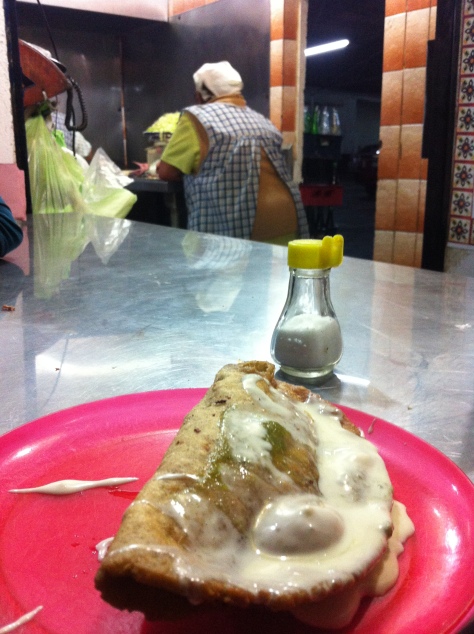